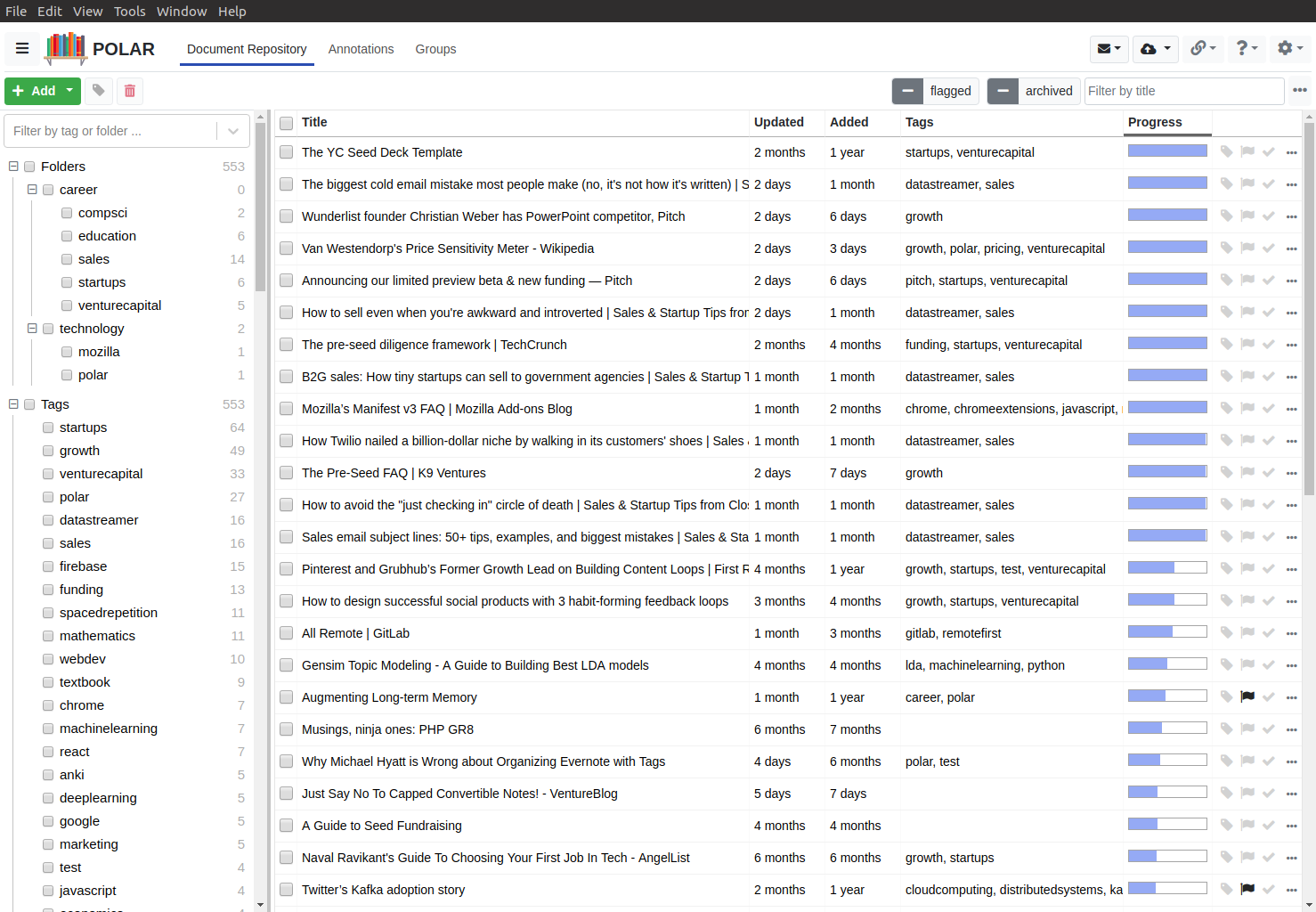 Polar 1.40 is now available. This release includes a number of new features upgrades and stability improvements.

First, I should apologize for the slower release cycle lately. I've been working on a number of internal refactors to Polar to help us scale moving forward. Among these was a pretty large refactor into a 'monorepo' using submodules to make Polar much easier to manage moving forward.

This will enable a number of new features which below. It's already improved our speed of development now that we've mostly finished the migration.

What's In This Release

Now let's get into what we've changed in this release.

Tags on the Sidebar

We now have tags (not just folders) on the sidebar. You can see the tags and the number of documents with the given tag.

This also works for the annotation view too and you can see the tag counts there as well.

Clicking on the tag will load the tag in the right pane.

Drag and Drop of Folders

You can now drag and drop documents on to folders or tag. Dragging the document will add the the folder or tag to the dropped document.

This won't yet work for annotations as we have to upgrade our viewer for this to happen but it's on the roadmap.

We fixed an issue with the desktop version of Polar (running on Electron) where it would intermittently fail to authenticate to Firebase when trying to sync to cloud.

This was really tough to track down and I apologize to anyone bitten by this bug. It would only impact some users and only some small percentage of the time.

We've upgraded to the latest versions of firebase, pdfjs, jszip.

In the short/medium term we're working on improving these issues.

Many users have been confused with how folders work and in retrospect I can see why. We shipped with a basic interface which was somewhat non-standard so it wasn't really possible to figure out how it worked.

We're going to add some UI changes to make this more accessible including a '+' (create folder) button and the ability to create folders, and then drag files into them.

We're working on improving groups which are only about 80% complete. I'm hoping that the drag and drop interface will make them easier to use.

I'm struggling with some UI issues here so my plan is to bring in a designer to help me understand the challenges I have with making it easy to use.

We're working on a redesign of the way web capture works.

Web capture is the ability for Polar to take a web document in HTML and store it within Polar.

Too many users are reporting that capture fails a significant percentage of the time.

The new design will allow it to work directly within the extension within the browser.

The intention is to target the web extension API which will mean it will work on Chrome, Firefox, Edge, and Safari.

I can't commit to supporting all four major browsers out of the door but that's the goal. We have about 90% of our users on Chrome but Firefox and Safari are definitely important.

This will allow you to enter a DOI, fetch the document into your repository, and store the extended metadata.

We'll also support resolving the metadata if the PDF has a DOI in stored in its metadata.

This will also serve as the basis for enhanced citation management.

The long term plans are to support the Pubmed API and the Fatcat API provided by the Internet Archive.

We're planning on adding thumbnail previews for documents added to Polar. This has been on the agenda for a while now but is only just now possible due to some complexities regarding thumbnails and snapshots across operating systems.

I think initially this might only work when cloud-sync is enabled but I'd like to get it to work on the desktop version of Polar at some point.

We're going to migrate to Electron 7.0 now that it's out. The major feature here is the updated Chrome backend but there are some other nice stability improvements here.

I'm also working on working other ways to get access to Polar premium for students and others in developing nations that might not be able to afford these tools.

I'll be talking about these in the next few weeks. Unfortunately, many of these features just flat out cost money including features like cross-device full-text search, OCR, text to speech, and other premium features I'm considering.

Want to make sure you're on the right version of Polar?

If you're using the web version of Polar you're probably running the latest version.

If you're using a desktop app this release will be pushed to all users over the next week. If you'd like to see if you're already on the latest version just go to Help | About.

If you'd like to upgrade earlier you can go to Help | Check for Updates.