What if you could train your brain the way computer scientists train computers and effectively remember anything you want - forever?

On the surface this sounds rather absurd. You're not a computer. You can't be forced to learn new things. Education is complicated, and (if you're like me), there doesn't seem to be any rhyme or reason to why some facts stick while you fail to grasp other (often more complicated) concepts.

Cognitive science has actually found a way to solve this problem. It turns out that we've had a solution for more than 135 years and the tools are finally starting to become mainstream.

Spaced repetition is centered around what's known as the 'forgetting curve' and directly exploits the way the brain encodes knowledge.

The forgetting curve is based on the intuition that it's best to study something just before it's forgotten. 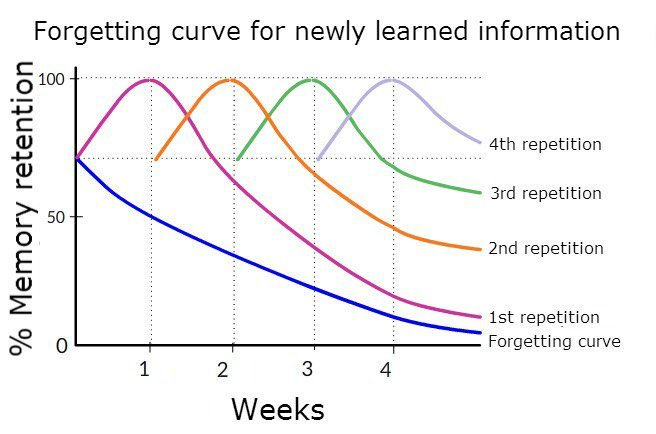 This was discovered in 1885 by Hermann_Ebbinghaus when he was researching the rate of information loss when trying to memorize three letter syllables.

As an aside, Ebbinghaus's major innovation, in my opinion was the use of data and statistics to learn how the brain functioned internally. Prior to Ebbinghaus, most "research" on memory was done by philosophers without any form of scientific rigor (at least no where near Ebbinghaus).

It might be best to think of these as time intervals from when you originally studied a piece of information.

Let's say you wanted to remember that "Fe is the chemical symbol for Iron." This is actually a bit complicated (at least for English speakers) as Fe is taken from the Latin word for iron - ferrum.

You can imagine that this would be quickly forgotten so you might want to recall it twenty minutes before it's forgotten.

It's this observation that the intervals keep increasing which makes spaced repetition so powerful.

This is eventually a scheduling system to supervise your brain to learn complicated topics which your brain wouldn't normally be able to encode. Supervised learning for humans. It's almost a cognitive prosthetic designed for force you to learn.

One key innovation is that spaced repetition intervals use exponential backoff - or ever increasing intervals.

What the heck is exponential backoff?

A naive (and rather insane) strategy to review your flashcards would be to just review them ever week. However, This won't scale to a large number of flashcards.

Over ten years, and 15 seconds pre review, this would require 2 hours of study time - for one card.

However, using an efficient flashcard scheduler, which adapts itself your answers, we're able to retain this knowledge using just 8 iterations.

This is approximately 99% more efficient (8 * 15 seconds vs more than 2 hours) than a naive solution.

These scheduler increases the interval based on your feedback. If you keep answering the flashcard properly the interval will increase exponentially (approximately t^1.3).

What's key about the forgetting curve is that it exploits exponential decay.