Minimizing Defection Might be the Solution to the Tragedy of the Commons.

Being that my background is in CompSci I tend to think about thinks in terms of probabilities, statistics, game theory, and distributed systems.

I've recently made what I think may be a unique observation about a number of social problems that might all be related to one root cause - defection.

I might be wrong but would love some feedback. It's an exceedingly complicated topic which has been researched for hundreds of years so it might be that this observation has been made before.

My initial epiphany came while thinking about two main issues:

It's my assertion that these are all related to the tragedy of the commons. I'll just quote from Wikipedia to save you a step:

The tragedy of the commons is a situation in a shared-resource system where individual users, acting independently according to their own self-interest, behave contrary to the common good of all users, by depleting or spoiling that resource through their collective action. The theory originated in an essay written in 1833 by the British economist William Forster Lloyd, who used a hypothetical example of the effects of unregulated grazing on common land (also known as a "common") in Great Britain and Ireland.[1] The concept became widely known as the "tragedy of the commons" over a century later due to an article written by the American ecologist and philosopher Garrett Hardin in 1968.[2] In this modern economic context, commons is taken to mean any shared and unregulated resource such as atmosphere, oceans, rivers, fish stocks, roads and highways, or even an office refrigerator.

I'd assert that the tragedy of the commons is actually a more general form of the prisoners dilemma (again, from Wikipedia):

The prisoner's dilemma is a standard example of a game analyzed in game theory that shows why two completely rational individuals might not cooperate, even if it appears that it is in their best interests to do so.

Instead of a prison term there's the destruction of some resource and the tragedy of the commons is generalized to more actors. Usually hundreds to thousands.

I think the core issue in the above is defection - the idea that one player can decide to cheat the others for their own benefit.

The FEWER the actors the less probability that there will be defection.

Here's a completely hypothetical chart at what I think the rate of defection would look like: 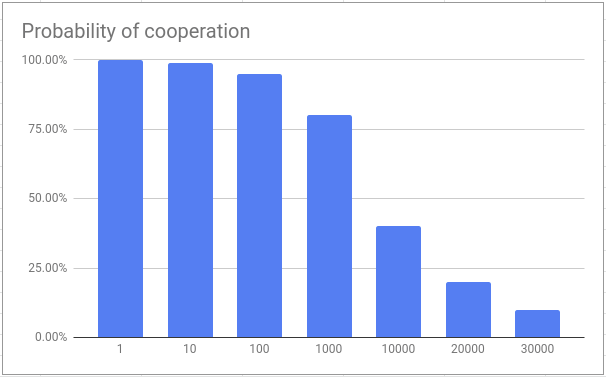 This would need to be validated experimentally but I suspect that the probability of cooperation (the opposite of defection) would be inversely proportional to the size of the group.

This would explain fundamental problems with collective action and why systems like communism are doomed to failure.

If you know the other person well and trust them, you're probably not going to defect.

However, if you have thousands of people you're going to be far far less trusting that someone isn't going to defect and screw you over. Hence you're more likely to defect as well!

This is a core observation. The more actors in a class that CAN defect the higher the probability that they WILL defect.

This why unions are so hard to form and manage. There are thousands of people in a company and they all have conflicting interests. If they would hold their ground they could achieve their goals but they don't.

The reason they don't is game theoretic and hence deterministic. We won't ever solve this problem until we reduce the probability of defection.

Interestingly enough, the same situation applies to corporations creating externalities (destroying the environment, hurting their employees, etc). They're essentially forced into this behavior due to defection.

If your company cares about the environment but all your customers care about is price then the companies that have a higher priced product will go out of business.

Oddly enough these customers are also driven by defection. Why care about the environment when no one else does? Why are you the only one who cares? Why pay $15 a pound for steak when you can just pay $5?

Interestingly enough, the optimum solution is always present when N=1. If there's just one actor (you) then you're not likely to destroy your own property. The more actors present the higher chance that someone's going to abuse the system.

A Protocol for Minimizing Defection?

What if we could solve this problem through core changes in our society?

I can't help thinking that maybe some sort of smart contract could be used here or a system of opt-in benefits and harsh punishments for defection.

What if unions gave perks to employees including job references, health benefits, etc BUT to participate in the union you had to put forth a $5k bond. This could be deducted slowly over time from your paycheck.

If you defect, the bond is revoked and you lose that money - permanently.

I'll agree that this is a week solution as I mentioned I'm still trying to work on an ideal way to handle this problem.

Consumers could do something similar for corporations as well. Have reserved payments given out over time but only if the companies don't create any externalities for which the consumer doesn't approve.

If these actors function collectively and make decisions as a group these could all be done automatically via simple majority.

I think regardless, identify the CORE issue here would allow us to keep working towards a goal. The first step towards a solution is realizing the problem.